The darker side of fiction… 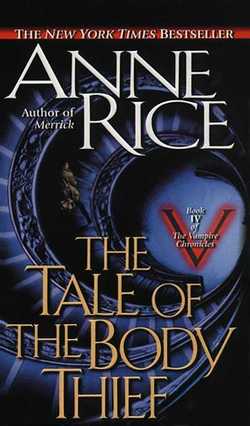 The Vampire Chronicles are so famous now that it seems almost cliché to include Anne Rice on this list, but I’ve adored her elegant style and Gothic-style stories since I was a little girl. Although I won’t deny that Interview with the Vampire was the first Rice novel to fall into my hands, the story that reformed my understanding of vampires as a species, it’s not the story that stands out most.  For me, Raglan James and the Tale of the Body Thief always held much more interest. Let’s be honest; after seeing the Brat Prince in action for three novels, watching Lestat flounder in his new-found human body was just TOO satisfying.

The Tale of the Body Thief was the first story in the Vampire Chronicles to step outside the formula that Rice has created; rather than witnessing a slow loss of humanity, we experience the shock and horror of a vampire thrust back into humanity. And Lestat? He doesn’t deal with it well. There is something unspeakably empowering in knowing that the monsters who haunt our nightmares could never survive in the skin we wear.

All told, the Tale of the Body Thief is a unique story told with wide-open eyes. It takes a look at vampires from a brand new perspective (even for Rice) and introduces a new breed of monster in Raglan James, one that’s shadowy and mysterious, one that I’ve never seen before. For that reason alone, Rice earns her spot on this list.

Error: Twitter did not respond. Please wait a few minutes and refresh this page.